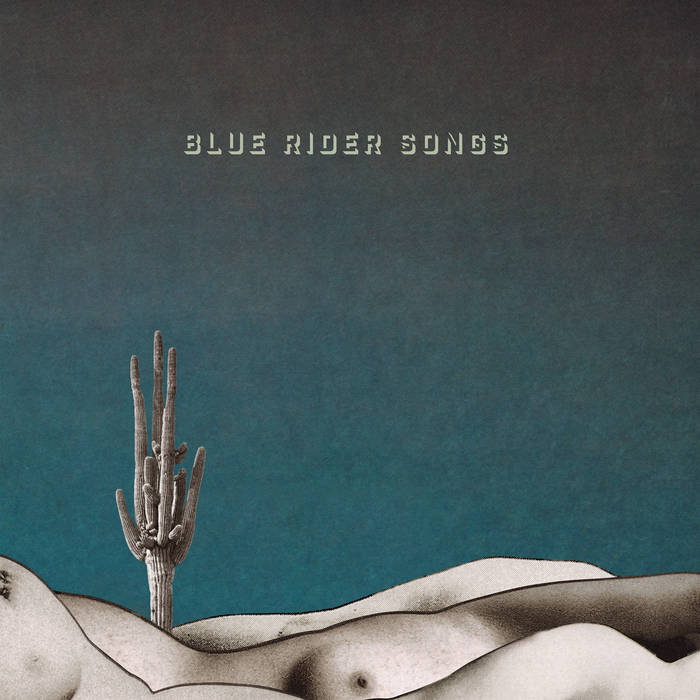 Matthew Woodman "That's when we knew he was outside time" Favorite track: Loss Of Forgetfulness.

“On the old highway maps of America, the main routes were red and the back roads blue. Now even the colors are changing. But in those brevities just before dawn and a little after dusk—times neither day nor night—the old roads return to the sky some of its color. Then, in truth, they carry a mysterious cast of blue, and it’s that time when the pull of the blue highway is strongest, when the open road is a beckoning, a strangeness, a place where a man can lose himself.”
- William Least Heat-Moon, Blue Highways (1982)

After many years spent as a steadfast and inventive collaborator—not only playing bass and producing four albums with Hiss Golden Messenger, but in large part forging that band’s sonic signature—multi-instrumentalist, recordist, and audio engineer Scott Hirsch has finally made a solo album, and it’s called Blue Rider Songs. The very notion of a “solo” album, and its associated emancipatory baggage, is a specious designation in this case, since music this quietly assured, this effortlessly unfolding, does not bloom in isolation or solipsism. Although Blue Rider Songs articulates Hirsch’s singular aesthetic (more on that soon) more lucidly and forthrightly than any other album on which he has worked, it is also, like most good music, the alloyed fruit of long hours, and long travels, with other writers and players, and with other records, and books, and films.

And indeed, these recordings feature notable, and notably subtle, contributions from Jade Hendrix (harmony vocals); Thomas Heyman (pedal steel), Hirsch’s old bandmate in the San Francisco group the Court and Spark; and HGM stalwarts Phil Cook (organ and harmonica) and Matt Douglas (saxophones), among others. But as a primarily single-artist vision and statement, it does speak to the way that back roads, detours away from or around one’s other, more high-profile creative pursuits, can lead lead to unexpected destinations arguably more compelling than anything the highways could provide. Sometimes, as William Least Heat-Moon demonstrates in Blue Highways, his classic travelogue of rural America (an admitted influence on this album), you have to leave the main roads to understand their contours and their worth. And as in “Sundown Highway,” that can be a slow, and heavy, journey; you might, like Lowell George, require “weed, whites, and wine.”

Blue Rider Songs emerged from various personal contexts: a year of near-constant touring with Hiss Golden Messenger in 2015; a move with his family from Brooklyn to Ojai, California, and the launch of his new Echo Magic West studio there; and above all, the process of making the self-titled Golden Gunn album with longtime musical partner M.C. Taylor of Hiss Golden Messenger and their mutual friend Steve Gunn. Hirsch wrote much of the music on that album, and watching Taylor and Gunn set words and vocals to his instrumental productions proved the necessary catalyst to take his writing and recording into fresh territory under his own name. Hirsch even reinterprets Golden Gunn standout track “The Sun Comes up a Purple Diamond” here, repurposing Gunn’s lyrics, but attenuating the song into something even more heat-stricken and dilatory than the hazy original version—no mean feat.

The album title, of course, references Der Blaue Rieter, the short-lived German modernist art movement (1911-14) pioneered by painters Wassily Kandinsky and Franz Marc, who were fascinated by color theory and synesthesia (for Kandinsky, blue was the color of spirituality, abstraction, and the eternal.) As an engineer and producer, Hirsch has always excelled as a colorist, and it’s satisfying to hear how his characteristic palette—an unlikely, humid nexus of J.J. Cale’s narcotic, head-nodding guitar boogie, Waylon Jennings’ honky stomp, and Scientist’s pristine, formalist dub textures—complements his own compositions on Blue Rider Songs. This is a languid, future blues unbothered by authenticity scare quotes or the implementation of studio technology—it lives “outside of time,” like the protagonist of “Loss of Forgetfulness.” (The same song’s line about “the work of some machines” is apt, as is the ambiguous reference—perhaps—to sci-fi prophet’s Philip K. Dick’s “pink light from above.”) This is the also the most of us have heard of Hirsch’s singing to date, and it is relaxed, limpid, and unassumingly sweet.

To describe Blue Rider Songs as cinematic is almost too easy, considering Hirsch’s acclaimed work as a film sound designer, but there are moments here (like “Raga of the Sea”) that remind me of what Ry Cooder’s Paris, Texas soundtrack might have sounded like if it was recorded in 2016; there is a similar sense of Western scale and desert longing. But what is most interesting about the album is not any one setting or voice, but rather the illimitable, in-between spaces it traverses, the blue highways it rides between various traditions and tangents of North American vernacular music and the various nodes of Hirsch’s long and accomplished musical practice. These songs suggest, in their modest way, that we get lost in the tangle of those lines on the map, before the colors have all changed. It’s good advice.

As a founding member of Hiss Golden Messenger, Scott Hirsch lent his sonic imprint on their productions, as well as shaping the sound of the live outfit, having toured heavily through the formative years of the band. The follow up to 2018’s critically acclaimed Lost Time Behind The Moon, Windless Day finds Hirsch pushing the sonic envelope of his studio and crew at Echo Magic in Ojai, California. ... more

Bandcamp Daily  your guide to the world of Bandcamp